My TMJ treatment has improved my overall health and well-being 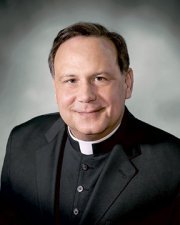 Having been diagnosed with sleep apnea in 2003, I was fitted for a head-gear breathing apparatus to alleviate the condition. After struggling with discomfort and lack of sleep, I discontinued use of the device. During a visit to my cardiologist in 2017, I was ordered to take another sleep test which revealed that the condition had reached a dangerous level and that it must be addressed immediately. I shared with Dr. G. Johnson my concerns from the past and he informed me that a new mouth piece for this sleep disorder was available and referred me to Dr. Terry Billings, DDS.

I contacted Dr. Billings and during my first appointment with him, after a series of tests, he determined that I had another condition, TMJ, which would have to be treated before addressing the sleep disorder. He explained to me that I would have to wear mouthpieces, one by day and one by night, for twelve weeks to correct this issue. My instant reaction was that as a Catholic priest serving as the rector of the St. Louis Cathedral, I often celebrate televised Masses during which a mouthpiece would certainly be a deterrent. Dr. Billings patiently and understandingly explained that I really had no option but assured me that he would be able to make weekly adjustments to the mouthpieces that would help with these concerns.

Now as I approach the final weeks of this treatment, I am pleased to share that I have been most satisfied with the care and attention of both Dr. Billings and his staff. The level of professionalism and proficiency which I have experienced in the weekly office visits have made a challenging issue bearable. It is amazing to me what the treatment of the TMJ has done for my overall health and well-being and as I now await the mouthpiece to address my sleep disorder I am most grateful to Dr. Billings for his diagnosis and excellent treatment during this period of preparation for it.

« Combination of our TMJ therapy and sleep apnea treatment
Dr. Billings and Dr. Levy quite possibly saved my life. »

Get In Touch With Us